This is a nice low key fell run which is part of Bampton Sports Day. I’ve  done the race a couple of times now  and I thought it would be nice to do it on my birthaday. It was a really hot day and I knew by the time of the race at 2.30pm it was going to be the hottest part of the day. The race starts on the sports field then heads out along a narrow path that runs along the river and once you’re on it there’s no way of passing people ,so I made a fast start so that I wasnt boxed in. I managed to get into a good position as we ran along the river , After about a mile we wade across the river and then we head up to Bampton Scar, .I knew that there were some good fell runners behind me and they were fast at decending so I had to try and push hard up hill to get as big gap as possible as I knew I would get caught on the way down. Its a tough climb up but managed to run all the way and once on top I knew it was a flat run out to the first check point where we collected our first band . It’s a short decent to the second check point and the second band and then back up onto the top and return back to the finish the same way we came up. I was a bit more confident about the decent and had a bit more control so didn’t lose to much time. As I rn back down the hill all I could think about was the river and was looking forward to cooling off as I was starting to over heat. I crossed the river and made sure I got a good dowsing which helped for the last section along the river back to the finish. It was nice to finished first especially on my birthday but the best bit was the swim in the river after the run. 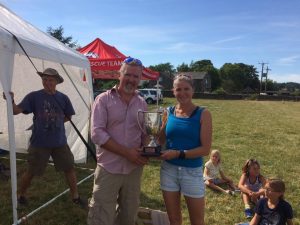