After doing the Triathlon I thought my foot was getting better and so I decide to do our club championship 10k at Long Martin. This is a local race and is organised by the primary school and all proceeds go to the school . This is a tough undulating race and not a PB course.  I was first lady for most of the race and ran fairly steady , apart from a friendly  tussle with a fellow club member James.  I was concentration to much on James I hadn’t realized that the second lady had slowly closed the gap and it was only a spectator that told me she was getting close.  The finish wasn’t far away and so I put my foot down and manage to win but only by 10 seconds. This was the third time I have won this race its always tough and hot but I always enjoyed it. 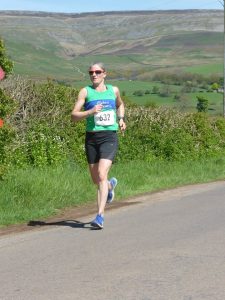 The next day when I woke up I found I had aggravated my foot injury and could hardly walk  and I think this was a result of running hard down hill on hard tarmac roads. I had a triathlon on the Sunday at Southport and it was an age group qualifier for team GB for the world championships at standard distance so I had to stop running to protect my foot and so just concentrated on swimming and biking.