I was using this race as a rehearsal for the Lakesman Triathlon in June. We had read the instructions for the race  -don’t know how many times but this is  where the problems started as we read it as a Draft Legal race ,which meant no Tri bars -so we took them off and left them at home. It wasn’t till we got down that we found out the race was “DRAFT ILLEGAL” and everyone was on TT Bikes.

We when down the day before and registered and had a good look round the venue and went back to the hotel for an early night.

4.30am the alarm went off and I managed to get a good breakfast into me. I was feeling  good I was looking forward to the event.  As I walked down I practiced my mount and dismount on the bike which were perfected . I racked my bike and set up my gear in transition and put my wet suit on ready for the start.  I had a look  at the swim course in the lake and checked to see were all the buoys where and where the exit for the swim was. I was looking forward to the swim feeling confident . I listened  to the race brief and made my way into the water . I moved to the outside of the group to have more space so I wasn’t in the middle were all the thrashing happens . The hooter went and we were off. It was still in a  battle at the start so I tried to find my own space but for the first lap were ever I moved I was still getting hit . After a putting up with this for a whole lap I was getting frustrated and I think this anger fired me up and managed to pull away and  have a decent second lap. Still fired up I exited the swim and not concentrating I went the wrong way ,taking another competitor with me. We both got shouted  at by the crowed who pointed us in the right direction . I ran into transition and even though I lost a little time going the wrong way I realized I had swam a 1500m PB of 24mins 12.secs

I had a good transition and collected my bike but on exiting the transition I struggled to get on my bike as other competitors were on the course coming into transition, Finally got away and settled in on my bike . The course was pan flat and perfect for a TT bike so found it hard to make any progress . There were a lot of competitors on the course and so the officials were on the look out for people drafting and so I was careful of not breaking the rule, so was upset when another competitor accused me of drafting in front of a marshal. So from that point my head went down thinking I might get penalized. I pushed onto the finish in a time of 1hr 11.43 -slower than I wanted as I know I could have gone faster. Left T2 without any problems and just settled into the run knowing I couldn’t push it because of my foot and finish the run in 45mins 17 sec and an overall time of 2hr 25.08. 4th in my age group  . I thought this event was just a qualifier for the world championships in Australia and I didn’t  realise it was also the British triathlon championships . As the winner of my age group was Scottish she wasn’t included in this race so I was awarded a bronze medal . And ss the silver medalist hadn’t shown her intent to qualify for the worlds I was awarded Q2. 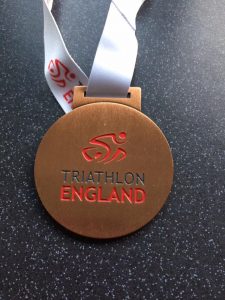 I made so many silly mistakes in this  race , which I have learnt from but just glad it wasn’t in my A race . When I returned home the first thing I did was to make an appointment with my physio Emma hoping she could sort my foot out.